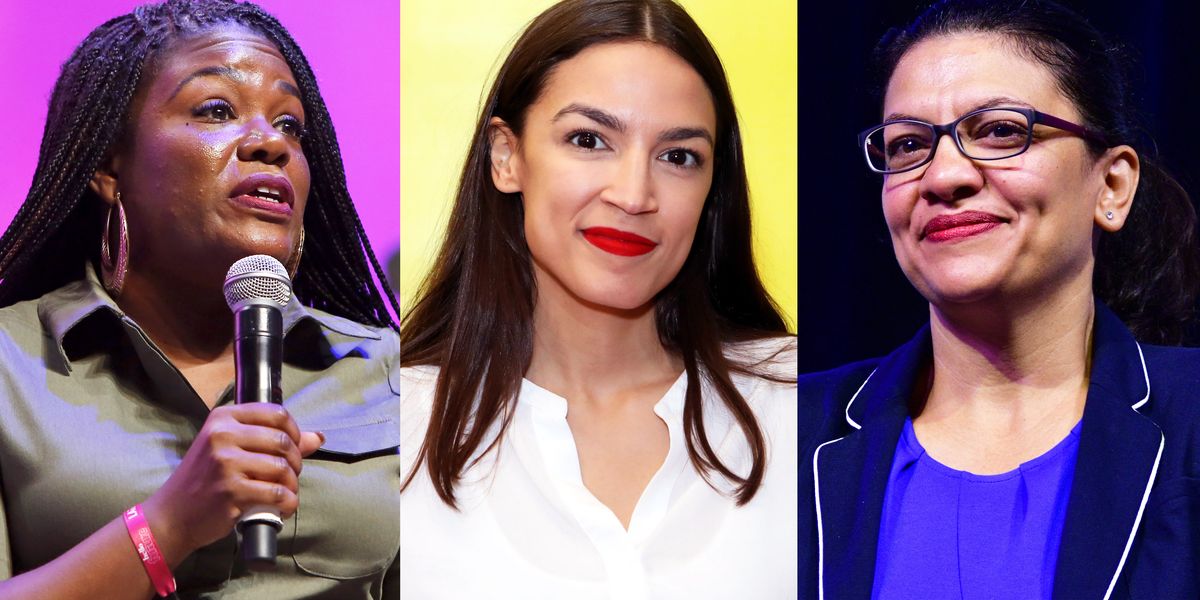 Before Alexandria Ocasio-Cortez was sworn into Congress as the youngest woman to ever serve in the legislative body, she was already expounding the values of thrift shopping. “There’s so much pressure to present ourselves in the world a certain way, and, sometimes, that means looking a lot more expensive than what you can afford in a moment,” she told ELLE.com back in December 2018. “I am a thrift shopping queen,” she added, sharing that she also started using Rent the Runway after her friend gifted her a subscription. (In 2019, the Washington Post reported that women on Capitol Hill were utilizing the service, which allows you to rent work wear and other clothing, so much that nearby mailrooms were filled to the brim with RTR garment bags.)

In the two years since that interview, Ocasio-Cortez’s clothes have become a constant source of conversation, for both her supporters and her haters. And thrifting on the Hill? That’s only become more popular.

Last Tuesday, Congresswoman-elect Cori Bush made news when she tweeted: “The reality of being a regular person going to Congress is that it’s really expensive to get the business clothes I need for the Hill. So I’m going thrift shopping tomorrow.” At the time, Bush was gearing up for orientation for the freshman class of the 117th Congress; she’d recently been elected as the first Black congresswoman from Missouri.

Pretty soon, her tweet went viral. Its message was clear: Traditionally, American politics has been a place for the very rich, and even more traditionally, for very rich men. (It’s been reported that a majority of those in the current 116th Congress are millionaires.) There are extra obstacles for officials like Bush, or as she says, “regular people,” and the price tag on the dress code is another product of that unbalanced playing field.

But the response to Bush’s declaration proved something else—those demographics are slowly changing. The group of progressive congresswomen known as The Squad, who will be welcoming Bush into their cohort come January, quickly shared their own thrifting secrets: Rep. Ilhan Omar responded to her tweet, writing that “thrifting is the way to go” and that she specializes in “$50 or less outfits.” She even offered to pick up a scarf from a Somali shop in her district for Bush to wear. Rep. Rashida Tlaib wrote that she still wears “some of my maternity clothes under those blazers,” before adding that she gets the most compliments from her thrift shop finds. Ocasio-Cortez chimed in too, writing about her strategy of “thrifting, renting, and patience” for building a congressional wardrobe. It was a welcoming gesture, but also a signal to other working class women looking to ascend to elected office one day: You belong here, too.

And companies took notice as well. thredUP, a popular online thrift store, started The Hill Thrift Box just days after Bush’s tweet, inspired by her and Ocasio-Cortez. When you order the new box, thredUP will send you a personalized style box filled with workwear items, essentially a secondhand Stitch Fix. “For every thrifted outfit on the Hill, we’ll save 35 pounds of carbon,” the company announced. Erin Wallace, VP of integrated marketing at the company, told ELLE.com via email that the popular tweet made them realize “these leaders have a relatable problem: new job, new dress code.” She said, “It’s amazing to see women having candid conversations about thrifting as a way to rotate their wardrobes without waste.”

Bush seems keenly aware of the power of publicly embracing thrifting; the day after her original tweet, she shared her finds in a Twitter thread that doubled as a fashion show. Bush modeled her new pieces, walking to Beyoncé and Cardi B, with captions that laid out the hard, sometimes unspoken, truths of being in Congress:

“Most members of Congress aren’t working class. So when a regular person like me runs, it’s hard to handle everything from how much it costs to run, down to the clothes I’ll need to wear at work.”

“If elected to Congress, the first paycheck you get comes at the end of January. If you’re living paycheck to paycheck when you run, you have to find a way to make it months without income. We’ve got to make Congress more accessible to regular people.”

“This is also about the pink tax. The clothes I wear in the Capitol could make headlines, but a man does not have to worry about that. We’ve got to spend more on our wardrobes, and then caring for them costs more on top of that.”

She then thanked her “siSTARS,” the members of The Squad, for their support. What began as a discussion about wardrobe tips turned into a reflection on who these leaders are—women that more closely resemble the constituents they’re representing—and what they believe in—not shying away from their congressional struggles, financial or otherwise, or their sisterhood.

Rep. Grace Meng, who also responded to Bush’s tweet with a suggestion for a consignment shop in Washington D.C., told ELLE.com that standing up for one another is essential. “Many of us didn’t grow up seeing people we knew in suits or clothes that congressmembers wear,” she said. “For many of us, we don’t have connections to luxurious designers to borrow clothes or accessories or budgets to afford high end items, and we don’t need it either…Like others before her, Cori is demystifying Congress and showing anyone can succeed, including by thrifting.”