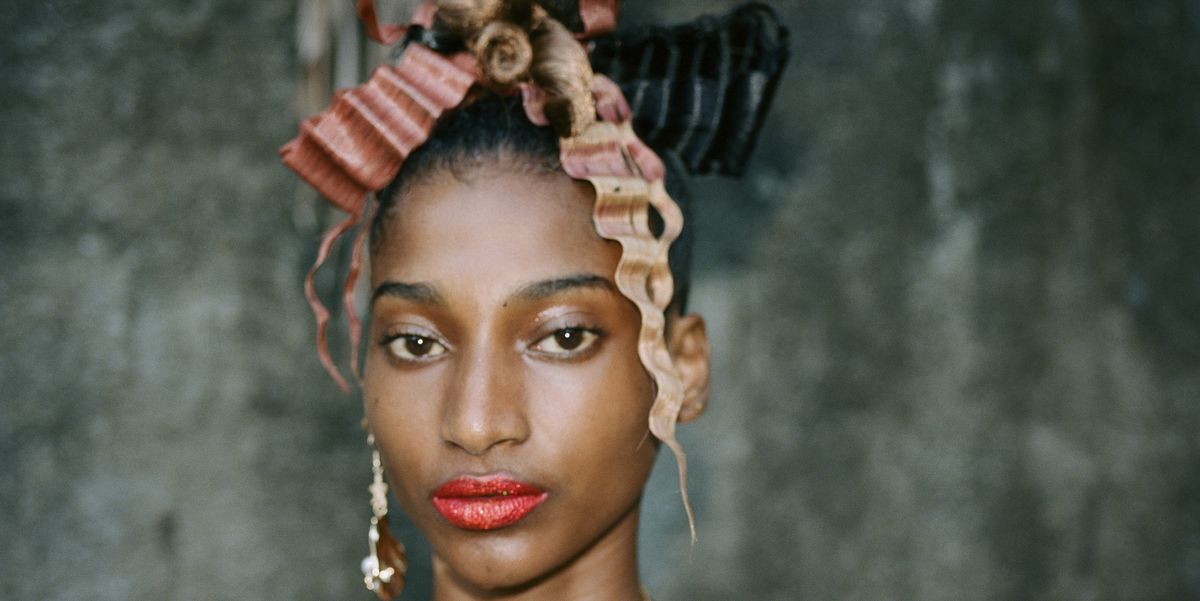 A captive audience, camera phones out, surrounds hairstylist Jawara at the Area fall 2020 show. He’s using a lip-gloss-length needle to secure an eight-pound Preciosa crystal wig on a model’s head for an Irving Penn–meets–KiraKira+ moment that will make it onto every Fashion Week recap (and also inspire the cover of ELLE’s September 2020 issue featuring Cardi B). While Jawara isn’t yet as recognized as runway mainstays like Guido Palau, the beauty shock waves he’s been delivering are sure to change that soon.

Brooklyn-born and Jamaica-raised, Jawara has become one of the most coveted hair artists among models, musicians, and the fashion elite. Solange Knowles, who’s been a fan since 2017, helped bring his name onto the editorial-world Rolodex. A slew of other boldface clients, including FKA Twigs, the Hadids, Megan Thee Stallion, and Alicia Keys, quickly followed. His signature sculptural styles—imagine a ponytail that floats effortlessly in a horizontal position or an intricate Medusa-like crown of braids and twists—are as spellbinding as they are original. Even the most basic looks, like a classic braid or simple blunt cut, are elevated in his hands, transformed with unusual flourishes (see: his inspired use of spray paint at Pucci fall 2020). “I call it ‘boughetto,’ ” Jawara says of his aesthetic. “I mix bougie and ghetto together, combining the refinement of couture hair with a little bit of street edge.”

His early influences include vintage ELLE and Essence magazines he discovered in library archives. As a child, Jawara was also inspired watching his aunt, Vanetta Bailey, style hair at her salon in Kingston. She taught him how to set rollers when he was just seven years old. “Women would come into my aunt’s salon feeling stressed or down and leave feeling excited,” Jawara says. “Jamaica is exotic, and people there explore colors and fashion that aren’t always practical. I watched her do these gravity-defying, towering hairstyles that were so otherworldly.”

After finishing cosmetology school and earning a fashion degree in New York, Jawara emailed the agents of hair legends such as Palau and Sam McKnight “over and over and over again” until he finally got a response. He eventually joined the teams of both stylists, traveling the globe, assisting on editorial shoots, and working backstage. He went solo in 2014, catching the eye of celebrities like Knowles and Area designers Piotrek Panszczyk and Beckett Fogg. “He uses materials like crystals, which are important to our brand, and makes them new,” Panszczyk says. “Both as a beauty statement and a cultural moment.”

While Fashion Week looked different this season, Jawara’s creative mind hardly missed a beat. That starts with his virtual exhibition with Art Parnter.com, titled COARSE: The Edges of Black Ingenuity. As your avatar wanders through the white-walled gallery (what a time!), you’ll see sculpted hairstyles by Jawara captured by photographers like Tyler Mitchell, Nadine Ijewere, and Kyle Weeks. He’s also testing ingredients from Jamaica that will hopefully result in his own hair products someday—all in homage to his past, yet very much poised for the future.

This article appears in the October 2020 issue of ELLE.