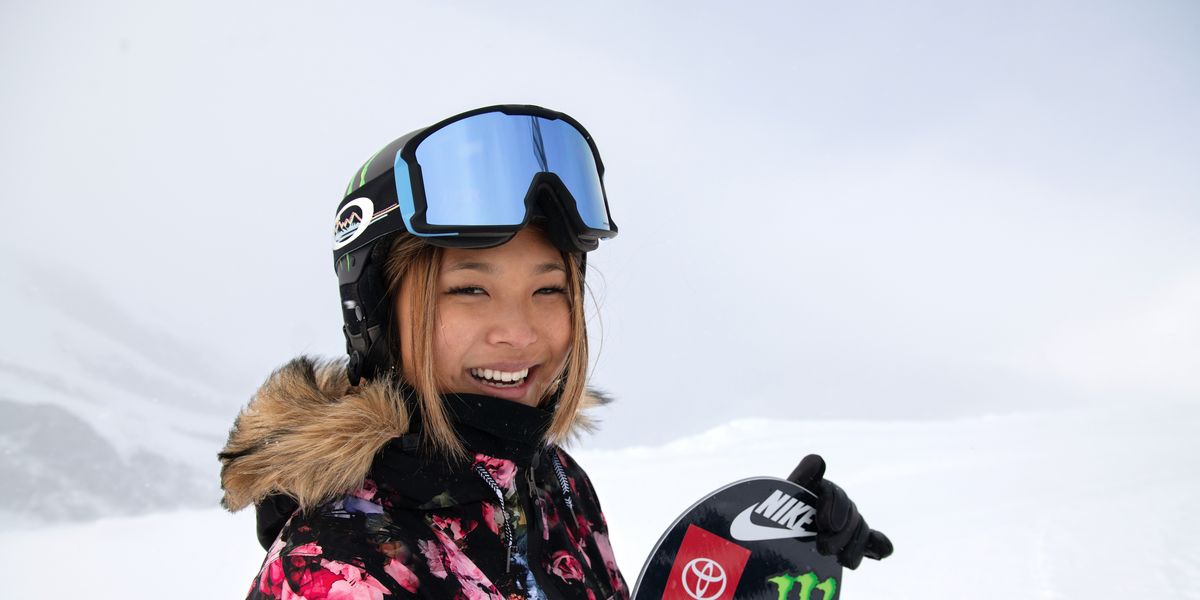 Chloe Kim is America’s relatable sweetheart. It wasn’t her 2018 Olympic gold medal or the fact that she became the youngest female winner in snowboarding history at 17 years old but her overall demeanor that won our hearts. A ball of sunshine with really good hair, Kim became the face of the sport and showed how “like us” a winner can be, tweeting about ice cream and churros between Olympic runs.

The whirlwind media circus that followed her win has since quieted down and she spent the last year as a freshman at Princeton University. Now 20 years old, she’s stays relatable. The 2022 Winter Olympics in Beijing has not yet been affected by COVID-19, so her training is still on course. In the meantime, she’s spending quarantine at home in Los Angeles with her boyfriend, binge-watching Netflix, and wearing sweatpants.

We spoke to Kim about her gig as the face of Roxy (“I’ve always loved Roxy’s stuff”), Asian American representation, and a snowboarder’s hairstyle with a NSFW name. Read on for more.

How does your style on the mountain translate to your IRL style?

I am a big LA girl. I love fashion. I love like picking out fun outfits and really expressing myself through what I wear. I feel like now when I go out, it’s mostly to go get groceries or go run some errands and then I run back into my apartment, to my safe zone. So I’ve definitely been doing a lot of chilling in sweatpants, but I’ll throw on an occasional fit for an Insta pic right outside and then I’ll run back inside.

What made you want to partner with Roxy?

I grew up idolizing Torah Bright. She was actually one of those athletes that really inspired me to go to the Olympics because I watched her compete in 2006. When I got the opportunity to join the [same] team it honestly is probably one of the best decisions I’ve ever made. I’ve been loving Roxy t-shirt dresses lately to wear around the house—they’re so cozy. I’m just trying to be comfy while I binge-watch some Netflix.

What are you watching right now?

When quarantine first started and we were all really, really scared, we never went outside. So we rewatched Avatar: The Last Airbender. Then we rewatched Stranger Things. I’ve been watching The Blacklist. And right now I’m watching New Girl. To put it in perspective, I’m almost done with season one and I started yesterday. My boyfriend’s taking his midterms right now, so I literally have nothing to do. So yeah, I’ve just been watching Netflix and playing 8 Ball Pool on my phone.

As someone who spends a lot of time in the cold, do you have any beauty tips for people struggling with dry skin?

I moisturize five times a day. It’s crazy because the minute I leave for the mountain, I just feel my skin just starting to shrivel. I’ll actually bring a really light water-based serum with me in my bag that I’ll just throw on whenever my skin starts feeling dry. I’m using one from Tatcha right now that I love. A good cleanser at night is also important and I do a lot of exfoliating. I try to exfoliate four times a week because my skin gets so dry. We deal with wind burn, so you have so many dead skin cells on your face just from the wind being so harsh. Sometimes I’ll throw on Aquaphor on my face, just to get something on there.

Let’s talk about snowboards tendrils, which is the style where you stick pieces of hair out outside of your helmet. What are your thoughts on it?

There’s actually a term for it in our community. I don’t even think you’re going to put this down, but everyone calls them ‘slut strands.’ When someone told me that, I was like, ‘No, they’re called beauty strands. Don’t slut-shame me for having hair out.’

Do you have any favorite memories from the post-Olympics whirlwind?

I think my favorite memory was just seeing my family after. My dad immigrated from Korea a while ago and he sacrificed so much to support me, help me pursue my dreams, and become an Olympian and Olympic gold medalist. Not only my dad, but my whole family came together and they worked so hard to support me and always be there for me. At the end after I had won, seeing them was just the best moment of my life. I was so happy. They were so happy. We did it. We were so excited. And then a lot of other cool things happened. I was in a Maroon 5 music video and I met Jimmy Fallon. I rapped with G-Eazy at the ESPYs, all of that cool stuff. But I think family was definitely at the top.

You took a sabbatical from snowboarding before you started college. What’s harder: training for the Olympics or freshman year?

Freshman year. I’ve just been snowboarding since I was four and when I came to school, I did all my school online. It was really hard for me to adapt and I still don’t think I’ve fully adapted yet. I’ve never really sat in a class during the lecture or taken an exam in a classroom with professors standing there. I didn’t really know how to take notes in a lecture.

But I think the hardest part for me was actually meeting people. I was scared because I felt like so many people knew things about me when I didn’t know anything about them and it kind of made me a little uneasy. There was a lot of going to the dean’s office and being like, “Hey, I’m struggling right now.” “I think someone knows where my room is.” “People are taking pictures of me when I’m eating. It’s making me really uncomfortable. Can we do something about it?” But after a while it kind of stopped happening. I was definitely pretty guarded when I met people for the first couple of weeks, but then I met my friends that I still talk to and I love to death and after that it went really well smoothly.

Since your rise to fame you’ve also become a role model for Asian Americans. How do you handle that responsibility?

I think I really struggled with that at first because I was really young when Asian American representative became part of my life. I think I was 16 when I started to feel that responsibility and I was like, “Damn, I don’t even know… I’m still trying to figure myself out. How am I supposed to handle this?” But I think for me, I should be making sure I’m a good person first before I think about being a big role model. I need to accept that I’m always going to make mistakes no matter what. I’m still learning. I just need to be the best version of myself I can possibly be, and just be a good example, always trying to do the right thing, making hard decisions and just trying to be a positive person for others.

2020 feels like the year of nervous energy. As someone that has been on one of the biggest world stages, do you have any advice for people dealing with anxiousness?

Keep your loved ones close. When I’m feeling anxious, the first person I call is my mom or my dad or my sisters. And I would just say, be there for your family, your friends, just support each other and get through this time together and hopefully 2021 is a better year for all of us. Stay positive. We’re going to manifest all the right things for 2021.

Has the postponement of 2020’s Summer Olympics changed the way you’re approaching training for Winter 2022?

It haven’t because my Olympics are still on track, but I’ve definitely changed my training a lot. Before my first Olympics, I didn’t really work out, went to CPK all the time, getting pizza, whatever I wanted. After the Olympics I went riding again and I fell and I was like, ‘That actually really hurt.’ You’re not 10 anymore where you’re a rubber ball and just bounce back up. You can’t do that. So I got a trainer and I feel so much stronger and so much more confident on a snowboard. But I’m trying not to think about it too much. There’s still a lot that happens before and I kind of want to go in with the same approach as I did with the last one: just chilling.

You mentioned CPK, which relates to my next question. You became a snack expert during the last Olympics. Do you had any new snacks that you found during quarantine?

I love hot Cheetos, but they have to be the lime ones. Those have been my addiction lately. I also love gum. I go through 10 packs of gum a week. But with the churro thing, the funny thing was, I said I liked it and then I come home and everyone’s giving me anything related to churros. I got frozen churros sent to me that you can throw in an oven for 10 minutes and they’re ready. I got churro chips, churro everything, and I was like, ‘Guys, I don’t think I like churros anymore. I don’t think that’s my thing anymore.’ But if I can get my hands on hands on some Flaming Hot Cheetos, I’d be down for that.

Next thing you know you’re going to get Hot Cheetos-flavored ice cream.

Exactly. I’m going to be like, ‘I don’t think I’m into that anymore. What do I like now?’