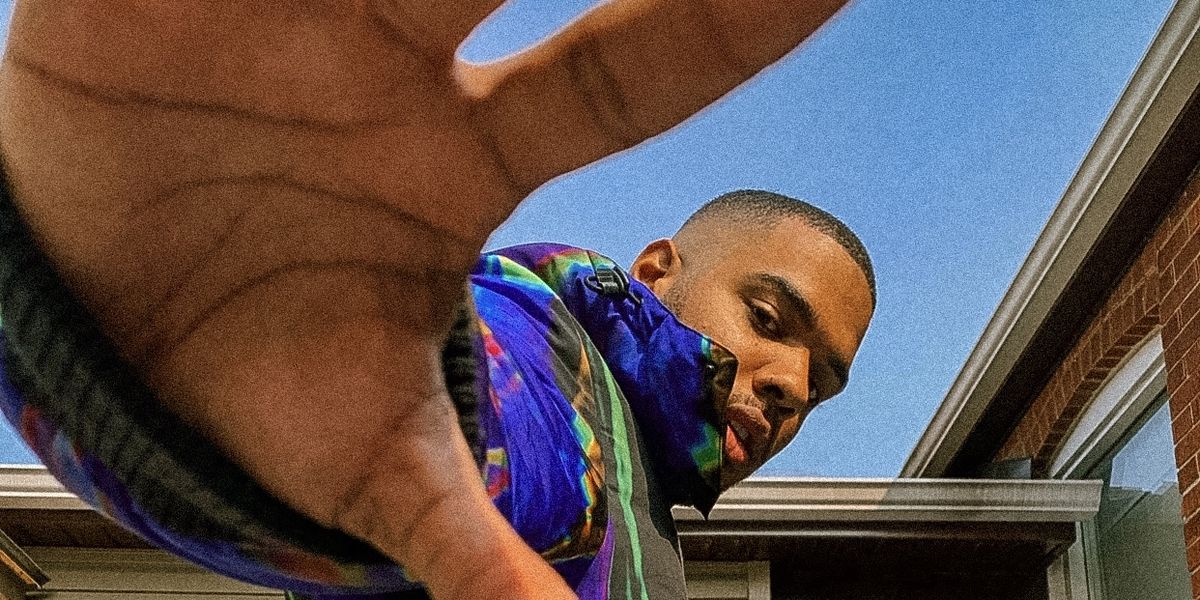 Everyone knows words of encouragement hit harder when they’re doled out alongside emojis. Thus is the power that 23-year-old Toronto native Donté Colley wields. Of course, with great power comes great social responsibility, and Colley has gone above and beyond what we seem to deserve in 2020. His Instagram videos have raked in millions of view, garnered the attention of 859,000 followers and paved the way for him to appear in the New York Times and on Good Morning America. Last year he even collaborated with Ariana Grande and Victoria Monet for their lo-fi music video “Monopoly.”

With every motivational WordArt that has glided across Colley’s page in, he’s risen to fame on a wave of honesty, vulnerability, and pure positivity. This years non-stop flow of personal and global struggles have allowed Colley to rapidly emerge as our one true hope. In the beginning of the pandemic, he created an endless supply of dopamine hits rabidly reposted, DM’d, and shared. From acting as our collective Insta-therapist to the tune of the Jeopardy theme song to choreographing Michelle Obama’s speech to breaking his back to Evanescence, Colley offered brief respites from the boredom.

But Colley also provided a light in the darkness. In the wake of George Floyd and Breonna Taylor’s murders, his grid took a turn. He put in the labor of educating his followers on news regarding Black Lives Matter, police brutality, and ways to help. He fully harnessed his platform to push the conversation forward. It was self-sacrificial, but for the most part it didn’t bother Colley. “My mental stamina and mental endurance was definitely put to the test,” he told ELLE. “But this is a marathon, this isn’t a 100 meter dash.”

The gift that is Colley is rare, and he’s living proof that doing the work, staying true to yourself, and keeping your chin up pays off, even if fame was never his goal. Not only has he captured our likes, but brands are lining up to align themselves with him. Colley is currently the quarantine star of the Diesel’s newest campaign, alongside fellow creatives Evan Mock and Julia Fox, all of whom were directed over FaceTime by RAYSCORRUPTEDMIND (in Toronto, Mallorca, and New York City respectively).

We videochatted with Cory about about how he remains positive through the darkness, the creatives that bring him joy, and the one pair of jeans he’s least like to try.

What denim styles make you feel the most you?

I am always in my Canadian tux all times of the year. I love a wide leg Denim. I love throwing it back to the seventies and the eighties. That’s just my style, but I’ve always grown up in denim and I’ve always grown up wearing it and being on the school yard and ripping them and just them aging along with me. But it’s a part of me. I’m always in some kind of denim.

Are there any styles you would not try?

I don’t think I can do a shin capri denim. I definitely can’t do a cutoff denim that’s in between my ankles and my knees because my legs are already a little bit skinny, so I don’t think I’m ever going to do that.

This Diesel campaign is about bringing positivity. How does that relate to how you approach fashion?

Fashion for me is such a creative outlet and really brings me so much joy. It really allows me to think outside of the box; There are no rules to fashion. Well, there are rules to fashion, but some rules are meant to be broken. And for me, that’s something that I’ve kind of grown up with the mentality of, especially my mom being a nail artist. She always has to think creatively outside the box and think about trends, but implementing them in her own way. Growing up in that environment, I’ve always kind of tended to just embrace being 100 percent myself, because I saw that within my own home.

In a time like this, to touch on Black Lives Matter and everything that’s been kind of rolling out over the past year, that’s super important. I’m almost grateful that people are turning an eye and really paying attention and focusing now because it’s so important. It tends to be a little bit overwhelming, because as a black person, we shouldn’t have to teach these things to people, even though that’s kind of how [my Instagram posts promoting awareness] kind of kicked off. But using my platform in that way also aligns with this campaign and is really using my voice and letting the people who support you know that there is still so much more road to go.

Concerning the labor you put in, how you were able to protect yourself during such a draining time?

What I’ve kind of done for myself to keep myself grounded in this little bit chaos, not even a little bit this chaotic time, is dancing and music and fashion and all of those things, because those are all elements of me that bring me joy.

I think that’s also a way to protest as well, through black joy and through us being totally ourselves no matter what, because we’ve kind of been told that we have to be this certain way in order to be accepted or to abide by what society has kind of set for us.

Do you have any lessons you learned from being vulnerable?

I think it’s letting people know that they actually don’t know all of you. When you are vulnerable, people tend to believe that they have this complete idea of you. Even though it is me, you don’t know all of me. That’s what I really try to share and set a boundary of with the content that I create. It is positive, but I don’t owe that to anybody. My videos are a part of my DNA. They’re a part of my blueprint, but they’re not the whole final product. The final product is me showing up in real life day by day.

Speaking of your videos: do the words come first, or does the dance?

The process is super spontaneous. It starts with the song and then it really just starts with me recording on my iPhone. And I just groove out. I kind of think of moments where I will put things, but I really don’t know what story I’m going to tell until I get to the editing portion where it really is authentic to me. It’s a message that I’m basically sending to myself. You can do this and you will get through this.

You are this source of hope and inspiration for thousands on Instagram. What social media accounts do the same for you?

TikTok has definitely been a source of joy. It’s very reassuring to see these young creators because sometimes I’m like, wow, your minds, your brains, you guys are killing it. They’re so raw and they’re so fun. Seeing these young adults, even older adults, just being themselves is something that I’ve always wanted to see on social media platforms because five years ago, it wasn’t like that at all,

I love Benny Drama. Benny is someone that I’ve watched grow too, which is so awesome. YungBBQ is this hilarious dancer who creates this comedic skits and is like on her street, so hilarious, love her. Rickey Thompson, Denzel Dion, too. The people that really are being so themselves— it’s just inspiring and encouraging. But I guess those are a few accounts. There’s definitely so many more.

We’re doing a lot of waiting right now, whether it’s waiting for the presidential election or waiting for COVID to end. Do you have any words of encouragement for people that are feeling stuck?

For me, I would just say, so sorry. I’m rooting for the U.S. on the Canadian side and I’m over here and we are also intertwined and all I could say is use your voice because it matters. You matter, your opinion matters. It’s just, if you don’t use your voice you are missing out on some really important things that need to be taken care of. It’s a struggle. Right? All I can say is just be you and do you always, no matter what, but it’s definitely a struggle.

I can only imagine what this younger generation is learning, because it was definitely reading a whole new term of things to kind of get caught up on. But there’s just so many things that are left on site and it’s time to say something.