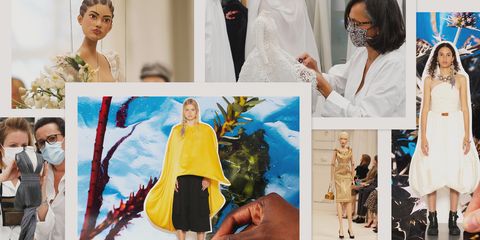 Dior: FRANCOIS GUILLOT/AFP via Getty Images; all others courtesy of the designer.

At one point this spring, Jeremy Scott indulged in a piece of self-care. Prompted by “how infuriatingly disgusting the news has become,” he turned off CNN and switched his TV’s default setting to Turner Classic Movies, where he happened upon a film that stirred his imagination. Lili, starring Leslie Caron as a naïf who “befriends” a group of puppets, was one of the inspirations for his spring 2021 Moschino collection (along with the less TCM-friendly Team America: World Police.) When we spoke over the summer, Scott had been mulling over the importance of bringing emotion back to fashion. His solution came in an unlikely format: marionettes, made in collaboration with Jim Henson’s Creature Shop, who “walked” his onscreen runway, under the gaze of a phalanx of marionette fashion editors.

Scott may be particularly in touch with his inner child (past Moschino collections have been themed around Barbie and paper dolls, and he proudly cites that he was the first designer to dress Miss Piggy.) But he wasn’t alone in turning to the spirit of play in recent months. As part of Dior’s fall 2020 couture film in July, petits mains labored over doll-sized versions of the house’s couture creations. JW Anderson’s spring 2021 “show in a box” brought the runway home for lucky recipients, with paper cutouts of models in the clothes subbing in for the real thing. Anderson’s show notes called it “a celebration of fashion at its most frivolous, embellished, poetic; escapist and liberating, even.” And the New York label Dauphinette sent out paper dolls to editors this season in lieu of a lookbook.

The use of dolls and marionettes wasn’t just a workaround for physical shows, though that was surely part of the appeal right now. It also felt like a playful throwback to a time in all our lives when fashion was theoretical in a fun way: namely, childhood. One of the first ways I engaged with fashion was drawing paper dolls of imaginary collections I’d wear “someday,” and I’m sure countless designers cut their teeth making looks for their Barbies. Pastimes like this, now that time has slowed down in many ways, feel relevant again. (When was the last time many of us had enough time to pursue something whose literal meaning is “to pass time?”)

It puts one in mind of the Théâtre de la Mode, a historical curiosity that both Dior and Moschino cited as inspiration. The brainchild of Nina Ricci’s son Robert, it came about in another time of crisis: post-World War II France. Designers including Balenciaga, Balmain and Schiaparelli created dresses for miniature mannequins that made up a touring exhibit, a way to proclaim the relevance of Paris fashion to the world despite a rationing-induced lack of resources. While it was a very different historical moment, the Théâtre’s aura of scarcity-induced creativity feels akin to some of these 2020 experiments.

Finally, the theme plays into our renewed obsession with craft. Between the many people who have taken up lockdown hobbies and the imperative, especially on the part of the Italian fashion industry, to celebrate artisans who have been hard-hit by the pandemic, the doll motif felt like an extension of that larger spring 2021 motif. Scott’s looks were deconstructed and turned inside-out to show off their craftsmanship. The collection, he says, was about “seeing the inner workings and seeing the beauty in that,” whether it was the interior of a dress or the carefully crafted marionettes.

“What we’re all craving right now is humanity. I think we’re desperate for it,” says Scott. Even when it comes in the form of a wooden doll. When “you see the strings,” he points out, “you know that a human made that and is giving it life.”