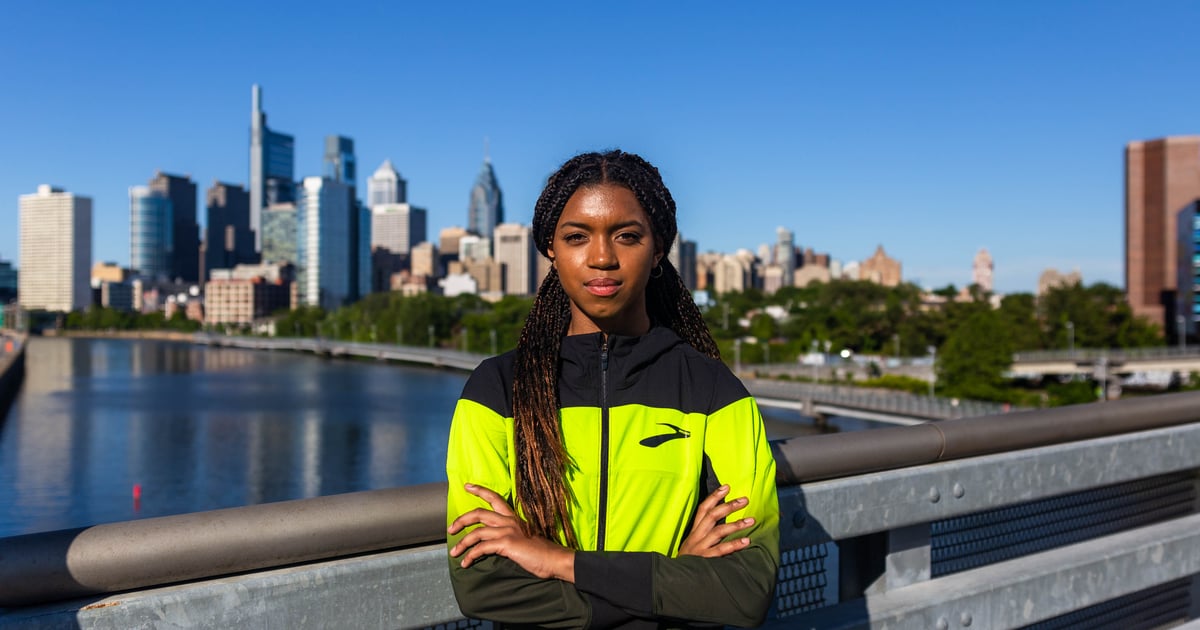 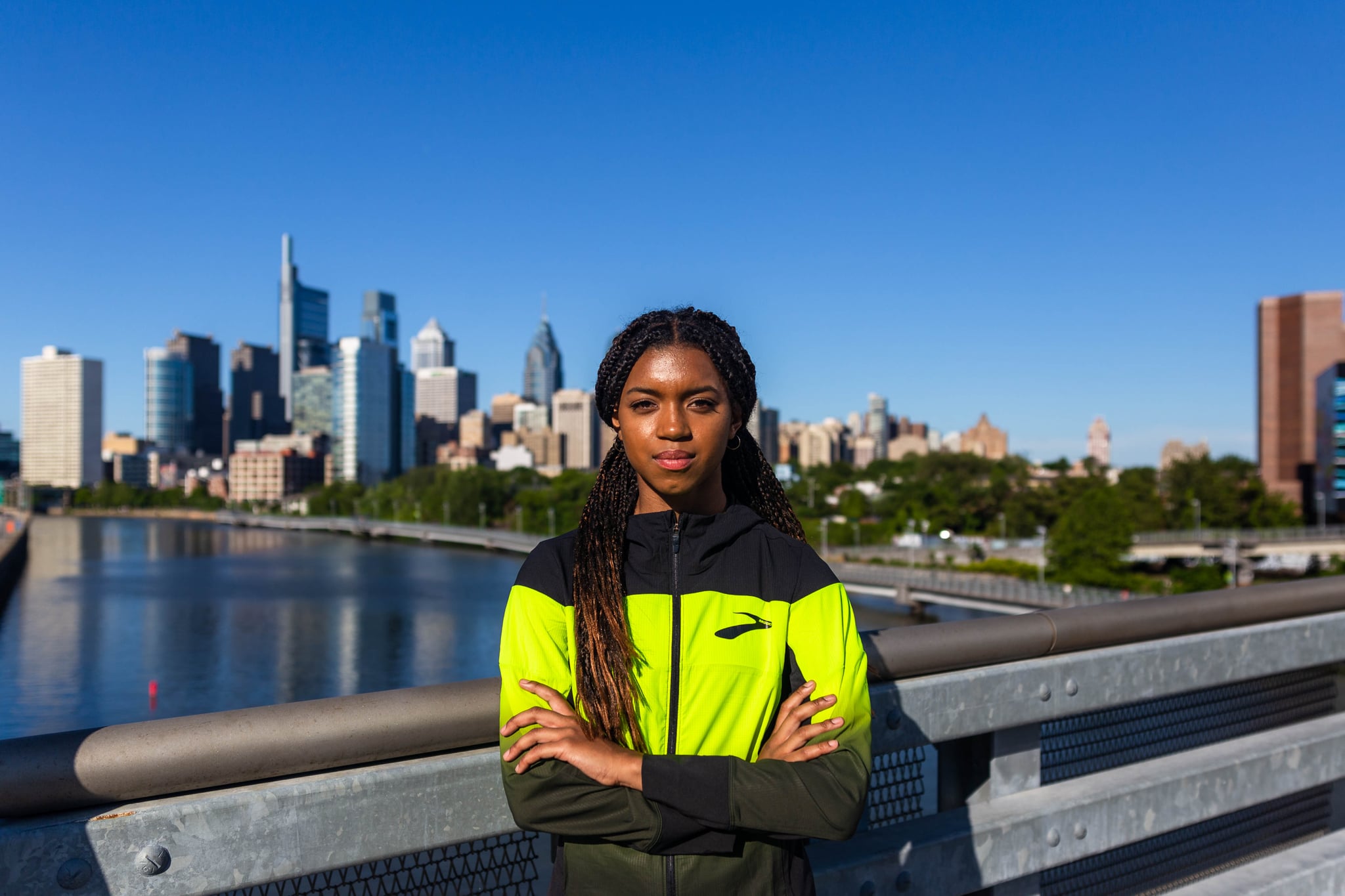 Nia Akins’s first race as a pro was at a scenic, “middle-of-nowhere” track in Oregon, with empty stands, masks on everyone who wasn’t competing, and cones separating competitors at a safe distance. “It kind of felt the way that most of the US feels right now,” Akins told POPSUGAR, a few days after the July 17 track meet. “Lots of masks, lots of social distancing. It feels weird to have that in a track meet because you’re used to more chaos and more people.”

But as soon as the gun went off, Akins said, none of that made a difference. “I zoned into the race. It didn’t really matter what the environment was at the end of the day — it was still a great competition.”

It was especially great for Akins, who became the first 2020 NCAA track athlete to go pro after graduating from the University of Pennsylvania in May. Only two runners were racing against her in the 600 meters, and the race was tight until the end, but Akins eventually came from behind to win. “It felt a lot more like an 800, toward the end there,” she joked. “I think we were all losing steam a little bit, so it was kind of like, ‘Who will slow down the least?’ But it was really great to have such a close race.”

Before officially joining the Brooks Beasts pro track club, Akins was a star runner at Penn and a two-time NCAA runner-up in the 800 meters. She was robbed of the chance to make a run for the title this year when the coronavirus pandemic shut down college sports.

“It’s about rolling with the punches.”

“It was definitely a difficult time,” Akins said. She had stuck Post-It notes on the walls of her room at Penn, laying out her goals for her indoor and outdoor seasons. “Taking them down was weird,” Akins remembered, knowing she wouldn’t have the chance to go after those goals. But the hardest part of the college shutdown wasn’t about track: it was saying goodbye to her friends, “not knowing if and when all we would exist in the same space again,” said Akins. “Senior year, with graduation and all of the events . . . I was really looking forward to that. I think that’s kind of what hits hardest for me.”

The transition from NCAA to pro was also tough because Akins lost most of her resources at Penn. “Everything was kind of taken away,” she said. “I took a pretty extensive break to figure out what I could do, without a track, without a weight room. It was really back to the basics.” Now working out with the Brooks Beasts, she said the situation is similar due to the safety precautions the team is taking. Instead of going into the gym, Akins said it’s been a lot of equipment-light workouts like medicine ball circuits alongside team runs. Akins, who majored in nursing at Penn, is also studying for her board exams and figuring out what kind of position will be feasible with her running career.

Akins transitioned to the pros not only in the midst of a pandemic, but also during the wave of racial justice protests that swept across the country following the killing of George Floyd. The movement motivated Akins to share her own recent and harrowing experience with racism, which occurred on the day of her virtual graduation ceremony from Penn.

Akins remembered feeling “on top of the world” following the inspirational ceremony, and went to a park on campus to run afterward. She was relaxing under a tree when she heard a man yelling racial slurs from a distance — so unexpected that Akins first thought it was a mistake. “I started to panic,” she said, especially when the man began walking closer. She hurried to the nearby campus security office, where an officer helped her and eventually took the man in for trespassing. The experience left her shaken.

“I don’t think people understand that when you hear racial slurs like that, it’s very demoralizing,” Akins said. “And there’s nothing you can do about it. You have to respond with silence. You have to be the bigger person, because as a Black individual, you will always be perceived as the more dangerous person.”

As protests around the deaths of George Floyd, Breonna Taylor, and Ahmaud Arbery began to gain momentum, Akins realized that silence wasn’t her only option. As she talked with roommates, teammates, and coaches about the protests, she sensed the distance they were putting between the killings and their own lives. “They were not really taking it seriously. They didn’t think it was something that was tangible in our community.” Sharing her own experience was a way to end that illusion. “There were people around me who thought that we were different, or that this doesn’t happen to us because of our socioeconomic status or our education level or our community. It’s just not true,” Akins stated. “It’s an everywhere problem.”

Moving forward, Akins said she wants to see more substantive conversations around racism. At her track meet, she said, “Somebody yelled out, ‘I don’t know if you care, but Black lives matter.’ That was very supportive, but also very targeted. It was uncomfortable for some reason. It bothered me, but I couldn’t pinpoint why.” She said there should be conversations around that, too. “We need to understand how things are received and being dished out.” The goal, Akins said, should be inclusivity.

As for Akins, she’s still training and setting her sights on big goals, even with uncertainty surrounding sports in the near future. She wants to break two minutes in the 800 meters and compete in the Olympics. “Right now it’s hard to formulate more specific goals without a more specific timeline,” she admitted; her current objective is to race as best she can, when she can. “It’s about rolling with the punches,” Akins said. “Trusting the process and hoping we’ll get to where we need to be, whenever that will be.”